The sweetener stevia – also known as candyleaf, sugarleaf or sweetleaf – is a plant from the stevia family. Stevia rebaudiana Bertoni was discovered and researched by Swiss botanist Moisés Bertoni and Ovidio Rebaudi, a chemist from Buenos Aires, who gave the stevia plant its full name.

The indigenous people of Paraguay called the plant “Caa-Hee”, meaning honeyleaf or sweet herb. Inhabitants of South America have used the finely ground leaves to sweeten their mate tea beverage for hundreds of years. There are also reports of tribes using stevia rebaudiana to stabilise blood pressure, soothe digestive problems, and treat complaints of the liver, pancreas and spine. Naturopathic applications usually use dried stevia leaves.

Where does stevia come from?

Stevia rebaudiana originates in South America. Originally, the plant only grew on the South American continent, largely on the high plateaus of Paraguay, Argentina and Brazil. There, the climate is temperate and humid and the soil sandy and clayey, which would usually indicate a lack of fertility. Today, Asian countries such as Japan, Thailand, South Korea and China are also major producers of the popular sweet herb. Various states in the European Union have also recently begun growing it. Sensitive to frost, stevia rebaudiana thrives particularly in Mediterranean regions such as Spain, France and Portugal. In Germany, progress in stevia cultivation has been slow. The University of Hohenheim has been examining the potential of the natural sugar substitute since as far back as 1998, with field trials for cultivating the sweetener ongoing in the Rhineland region since 2002. Despite this, stevia was not approved as a sugar substitute in the EU until December 2011.

What are the ingredients of stevia?

Today, 11 different steviol glycosides are analysed: steviol bioside, rubusoside, dulcoside A, stevioside, and rebaudiosides A, B, C, D, E, F and M. The proportions differ from plant to plant. In terms of quantity, steviosides (2 to 10% of the plant mass) and the rebaudiosides A and C (2 to 4% and 1 to 2%) are the most prevalent sweet components of stevia. Of all the steviol glycosides, rebaudioside A has the strongest neutral sweetness and is more prevalent in the plant. Rebaudiosides M and E have a very interesting taste, but are only contained in tiny traces. Others can produce a bitter aftertaste. Various manufacturers are working hard to find the optimum composition of the steviol glycosides in order to achieve the minimum aftertaste and optimum sweetness.

In which forms is stevia available?

Since its EU approval in 2011, the natural sweetener has been available to buy in various forms: tablets, powder, liquid or dried stevia leaves. Stevia has a very high sweetness, 200–300 times sweeter than sugar. In order to make dosing easier, the stevia extract is enriched with further ingredients. SteviaSweet Crystal therefore uses erythritol, which occurs naturally in pears, corn and watermelon, for example, as a carrier. This creates a healthy, calorie-free sugar substitute. You can find our diverse range of sugar-free SteviaSweet products here. 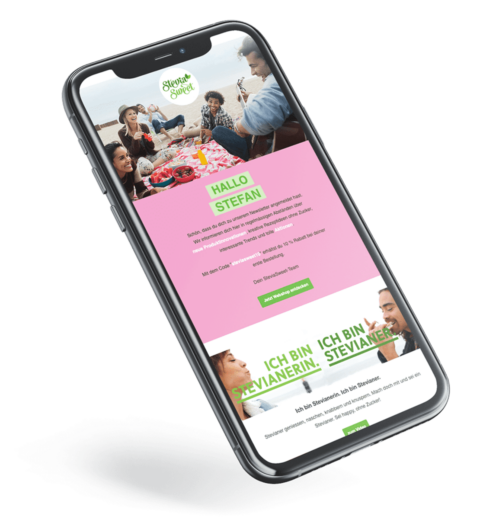